Revolve Sofabed | By Numen / For Use, Borovnjak & Bratović

Revolve is a multifunctional sofa that unites seating and sleeping needs. Its design can make a grand statement in a room, and with just a smooth rotation of 180 degrees transforms sitting into sleeping. Revolve offers an optimal sleeping quality while its padding resembles selfstanding mattresses, made of high resilience foam. Thereby it provides equal quality of your sleep on entire lying surfaces – whether in the middle or on the sides. Thanks to its dynamic shape and dual function it can be used in homes, offices, and secondary residences. Revolve is the recipient of the RED DOT Award for product design 2012, with which the international jury recognized not only the sofa’s functionality, practicality, and exceptional aesthetics, but also prostoria’s outstanding production.

Numen / For Use, Borovnjak & Bratović

Numen/For Use is an internationally acclaimed design collective led by product designers Sven Jonke, Christoph Katzler and Nikola Radeljković. For the past 20 years the group has been active globally in the fields of industrial and spatial design, iconography, and conceptual art. Numen’s distinctive experimental vigor and an interdisciplinary approach are reflected in the variety of objects and spaces they design for Prostoria. Their visual language is consciously reduced and implicit, and their concepts are strongly based in form and formal expression, while grounded in respect for local modernist heritage and its wide societal impact. Their designs for Prostoria include Polygon, Oblique and Trifidae easy chairs, Oblikant, Bik, Dobra, and Osmo chairs, and Revolve, Layout, Absent, Segment, Combine and Fade sofas.

Ivana Borovnjak and Roberta Bratović have graduated product design at the Faculty of Architecture, School of Design in Zagreb.

Ivana received her Master's degree in conceptual design at the Design Academy Eindhoven, while Roberta received her Master's degree in performance design at the Central Saint Martins College in London. After returning to Croatia they started working together on self-initiative projects in product design and visual communications. Independently they work on projects in the fields of culture, art, theatre, and nonprofit organizations from Amsterdam, London and Zagreb. In 2011 their first project Table for 1or2 has been selected by Konstantin Grcic and exhibited at Salone Satellite, Milan within the Young Balkan Designers collective. 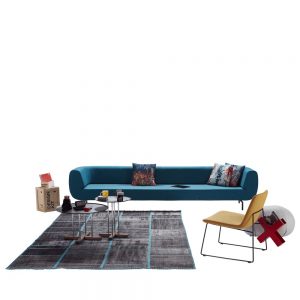